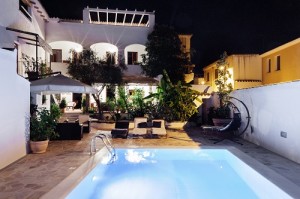 I was born in Onifai (NU), a small town in Lower Barony on the central east coast of Sardinia, light years away from the glamor of Costa Smeralda. There are four villages in Lower Barony, very small villages with little to offer, just their beauty and an incredible quality of life. Not a dream place, but a place for dreaming. The scents, the clear sky and the characteristics of the people are imprinted in the heart and mind with such force that even today I still feel their impact.
Read More

Ruggero Mameli shares with us… 2/3 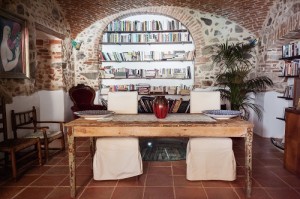 For the library, we chose to conserve the original walls with stone and beautiful arches. It was a warehouse where, to my great surprise, I found a well of about five meters deep. Once cleaned, lit and covered with thick glass, we found a whole new dimension. I think this feature is one of the most appreciated by my guests, especially the younger ones who would never miss the opportunity to walk over it and feel the thrill of being "suspended" over four meters of clear and fresh water.
Read More

Ruggero Mameli shares with us… 3/3 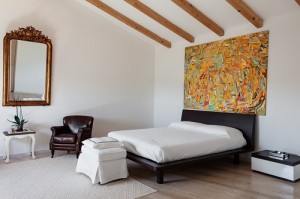 In the master bedroom, furnished with modern elements of extraordinary quality, we installed a large bathroom with simple and modern minimalist linear furniture, with the exception of the mirror, which my friend’s mother was going to throw out but I salvaged it - I think it's wonderful. For my guests, the house has two bedrooms and a colorful bathroom, and a room for staff during the night.
Read More 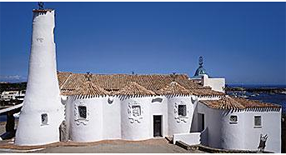 The creation of the Costa Smeralda (Emerald Coast), operated by the Consortium formed in 1962, marked the beginning of the tourist boom in Sardinia. The area affected by this significant architectural, economic, and cultural phenomenon extends about 50 km between Arzachena and Olbia and includes a portion of almost uninhabited territory.

The Consortium, whose first members included Karim Aga Khan, is formed around a very rigid organization. Its main focus was represented by the Architectural Committee, which monitored and regulated any construction activity that took place in the Costa Smeralda, on the basis of a manufacturing program fully sponsored by the City of Arzachena. 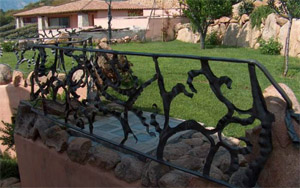 Owning a luxury villa in Sardinia is like owning a small piece of heaven, with its breathtaking views and exquisite beauty. Let ResRei Sardinia real estate consulting assist you in becoming a property owner in the beautiful island of Sardinia. Our blog is dedicated to providing you with useful advice and accurate information on Sardinian real estate and for your next project of purchasing a house, villa or property in Sardinia.

Although your future villa will have everything you dreamed of, it will not be complete without your finishing touch. Decorate your property to your taste with choices from traditional to contemporary or extravagant to simplistic designs. With imagination, you can turn your villa into an original work of art.