Spaghetti Westerns – In Sardinia there is a Western village

Many Films called Spaghetti Westerns were shot in the Spanish desert region of Almería and a few around Rome, but some were filmed in and around San Salvatore di Cabras, a small Sardinia village outside of Cabras near Oristano. If you go to San Salvatore di Cabras, you’ll find many house facades that look like they popped right out of a wild west set, because, well, they pretty much have. They were transformed in the 1960’s during the heyday of Spaghetti Westerns into wild west towns for movies. There’s even a bar in San Salvatore that a cowboy wouldn’t feel uncomfortable in. Throw yer peanuts on the floor pardner!

Garter Colt (Italian: ”Giarrettiera Colt”) is a 1968 Italian spaghetti western directed by Gian Andrea Rocco and filmed entirely in Sinis in 1969. It is one of the rare Italo-westerns with a woman as lead character and it is an icon of Quentin Tarantino.

But San Salvatore isn’t just about Spaghetti Westerns. The Festival of San Salvatore, which takes place the 1st weekend of September, is one of the oldest festivals in Sardinia. San Salvatore can seem deserted any other time of the year; many people maintain small houses here just to house their families during the festival.

“On the 1st Saturday of September, at dawn, a group of around a thousand runners, all barefoot young men wearing a white robe, carry the simulacrum of San Salvatore from the church of Santa Maria Assunta in Cabras to the rural church of San Salvatore. The church of San Salvatore, situated in close proximity to Tharros near Oristano, was built over an ancient underground sanctuary dedicated to the pagan worship of water. The seven kilometer run is repeated on the Sunday in the opposite direction to return the statue of the Saint to the church in Cabras. The celebration recalls the saving of the statue during the 1500s’ after an attack by the Saracens. In the evening, celebrations continue with grilled fish and Vernaccia, a sherry-like wine typical of this region, for everybody.” ~ Going to Sardinia

See where San Salvatore is located on a map which includes the spectacularly situated Tharros archaeological site by following the link: Tharros Sardinia Archaeological Site. 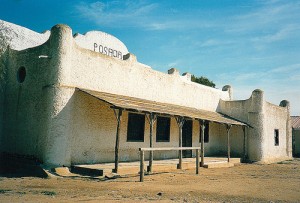